We Are NXP | Introducing Our Leader Inventor Clemens de Haas

Clemens de Haas has worked in Nijmegen for 28 years, beginning in Philips back in 1992, remaining in the same group as the company grew and became NXP. “This might sound boring,” he says, “from a career perspective,” but it’s anything but. “My job changed over time from analog designer to lead designer to IC architect,” explains Clemens, who recently joined the ranks of Leader Inventors, those engineers with 25+ granted patents to their name. “I actually have 34 filed inventions,” Clemens clarifies, “but it can take a long time before a filed patent is granted, so the real score is lagging.”

From his start in Analog Audio as an analog designer, Clemens de Haas first worked on automotive amplifiers. “This was a perfect fit for me, since my hobby was DIY high-end audio,” he says. “But after seven years, I was ready for a new challenge, so I joined the European Regional Automotive Center (EURAC) designing transceivers for automotive. My first task there was designing the LIN transmitter for the first LIN transceiver and our work here made me realize I like to be part of a team that beats the competition. EURAC grew and eventually evolved into in-vehicle networking, which is where you can still find me today.” 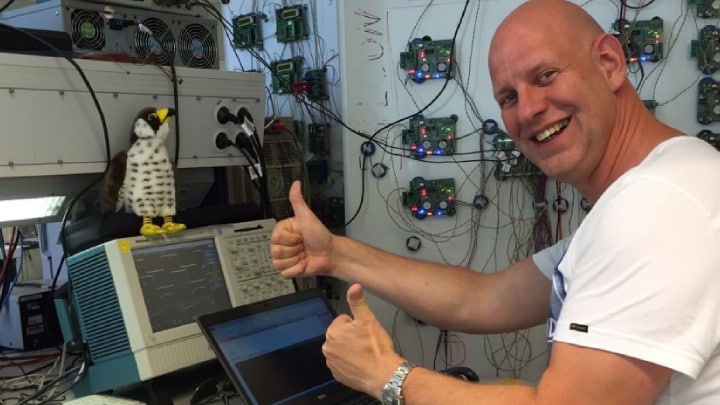 How Does Your Work Involve and How Does It Feel to Be Named Leader Inventor?

I’m an electronic engineer, an IC architect specialized in transceivers, working also on the standardization of next-gen CAN transceivers. It’s always nice to be credited for the work you do of course, so being named a Leader Inventor is a fine development. But at the end of the day, it’s just a title and it’s nothing compared to having fun in your work, being successful with the team who is working on the best products.

Where Do Your Ideas Come From?

Valuable ideas aren’t exclusive to Friday afternoons, they can come after many brainstorm sessions with colleagues. But I have had Eureka moments too, in the shower or on the toilet. In fact, I have had some ideas that were born just before falling asleep, you know when your mind is still processing the working day. I emailed myself a thought or idea that I’ve had just before sleep, to make sure I would read it the next day.

What Is Involved in Filing a Patent?

First, you have to do a quick “prior art” search to make sure you’re not inventing something that already exists. Then you write an invention disclosure, which can take a couple of days, with clear pictures and diagrams to explain your thinking. The last step is working with a patent attorney on the application process itself.

How Often Is a Patent Granted?

Personally I have had around 90% of my invention disclosures filed as patents and of these, around 75% have been granted. Over time I have become better in writing patents, which improves the chances of it being granted.

What Motivates You Most About Your Work?

Having fun doing innovative projects in a team, working on results that beat the competition.

Do You Have a Work Motto or Advice to Young Engineers Starting Their Careers?

If you have fun in your work, you will perform to the best of your abilities.

What Well-Known NXP Solutions Include Your Patents?

Patents for FALCON, the CAN signal improvement capability transceivers, are the ones I’m most proud of and the ones that are most valuable for NXP. They relate to a new standard in CAN transceivers and will help NXP to remain number one in that market.

What Are Your Main Interests and Passions Outside of Work?

I don’t have time for hobbies, it’s all work. Just kidding. I try to go to the gym at least once a week and I also excel in “couch sitting", reading on my iPad. And of course, I love spending time with my girlfriend, Rian and son, Bart.

Why Is NXP a Great Place to Work?

For me, NXP gives me the opportunity to work with high-end technologies. I’m still able to learn new things even after 28 years, so it doesn’t get boring. Also, I really enjoy working and interacting with my colleagues. That’s what I really miss in this challenging time.

The We Are NXP program embodies the people, spirit and values of NXP, which is committed to advancing the world by making it safer and more connected. We pursue our ambitions through technological innovations designed to enhance the quality of life of our employees, our communities and the world at large, all the while ensuring sustainability and minimizing our impact on the environment. Read more here.

Freek van Vlerken is a member of the NXP Impact team which provides inspiring stories about NXP's technological and societal impact.

We Are NXP | Luca: Winning the Waste Race

Your Journey Begins – With Our New Sales and Applications Training Program